For a child with a disability in Indonesia, their start in life can be marred by an incredibly long struggle to be accepted by their peers, their communities and even within their own families, as some believe it is a form of karma to punish them for past wrongs.

Yet when youth and adults with a disability enter through the doors of PUSPADI Bali’s workshop, they are not treated as another statistic.

Rather, we see them as people with immense value who only need our support to tap into their rich potential and chase their dreams, whether it be studying, employment or seeking training opportunities.

Indra is a young man from Bali’s northern Bulelang region who lives with his parents and five siblings.

“My daily activities are going to school, and then after that to help my family to clean the home and I play basketball as a hobby,” Indra said. He regularly comes to PUSPADI Bali to be fitted for a new prosthetic leg to replace the one he lost when a motorbike ran into him on the street several years ago.

Initially, Indra’s life was changed dramatically as a result of the accident, as it left him unable to walk or do many of the things that he enjoyed.

For a boy in his early teens at that stage this was a lot to take on.  Indra and his family worried about how he would function and what type of future he would be allowed to have, as they were based in a place and country where disability support, rights and awareness aren’t easy to access or virtually non-existent.

“In the beginning, I was really sad because of his condition and he couldn’t do his normal activities, but right after he got the prosthetic leg from PUSPADI Bali, he could do his daily activities again and I became less worried,” Selfi, Indra’s sister said.

It’s an encouraging outcome, and highlights our focus to empower every person with a disability that seeks our services.

Sadly, though, many local people with a disability who are unable to exercise their right to proper health services feel they should solely wear the pain and discrimination of their condition. Subsequently, their basic rights, quality of life and overall happiness are overlooked. 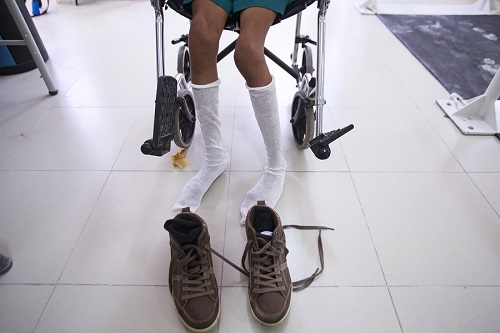 Living in a rural village of Bali and Indonesia where poverty is rife, some people with a disability are unaware or unfortunately believe they are not entitled to quality health care, as it is often far beyond their reach. It is a systemic attitude that we are desperately trying to change.

Indra heard about PUSPADI Bali and soon connected with us, where he received a free prosthetic leg which allowed him to regain his ability to walk and do his favourite daily activities through rehabilitation and check-ups at our organisation.

Wearing a comfortable prosthetic meant that he could be an active member of his community again and not be shut out from it.

Luckily, Indra has had the support of his family, friends and his community rallying around him. “In my community, people don’t see me as someone who has a disability….and at school they only ask what happened with my leg, but there is no bullying,” Indra said.

Without these vital local services, Indra would have faced a sombre future, as he and his family couldn’t have afforded the rising travel and medical costs associated with his care and wellbeing.

One prosthetic leg has made a world of difference in Indra’s life – restoring his happiness and hope that he will someday study to become a doctor.

“I remind myself to always be an optimist and don’t be disappointed with one’s self because nobody’s perfect.”

We believe that with Indra’s positive attitude and resilience he would make a fine doctor one day!

Want to sponsor a person with a disability and make a big difference in their life? Contact us on info@puspadibali.org or (+62) 361 464537. 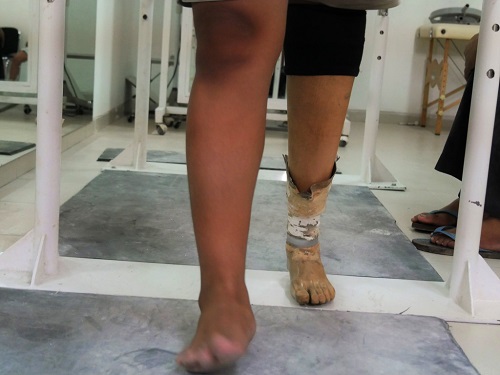